As interest rates rise and the tide of central bank stimulus that boosted markets during the covid years recedes, the cryptocurrency industry is undergoing an explosive deleveraging process. Vulnerable positions and faulty assumptions are being systematically tracked down and picked apart by markets. Due to the somewhat incestuous nature of the cryptocurrency industry, the largest pockets of unhealthy leverage are generally intertwined and interdependent, leading to a domino effect when one collapses.

The spectacular blowup of Terra and UST was only three weeks ago and already a leading major lending platform, Celsius, and market maker, Three Arrows Capital (3AC), look to be insolvent. Lido’s staked ETH product, stETH, and the billions of dollars of leverage riding on it also appear to be under increasing stress. This blog post will explain how these are all connected and provide some guesses as to where the contagion might spread next.

Celsius is a centralized lending platform with nearly two million customers [1] that offers high interest rates on deposited cryptocurrencies. Celsius has been able to offer this high yield to customers because it generated high income on their deposits by pledging them as collateral in DeFi protocols and providing them to market makers as unsecured loans.

To understand the company culture, clues can be found in the backgrounds of the management team. Their previous Chief Financial Officer was arrested in November 2021 on suspicion of money laundering, fraud, and sexual assault [2]. The current Chief Revenue Officer registered a business with a convicted money launderer in May 2021 [3]. The head of institutional lending starred in a widely distributed adult film. [4]

Impressively, Celsius managed to get the second largest pension fund in Canada, CDPQ, to invest in one of their funding rounds at peak valuation [5] and recently hired Rod Bolger, the former finance chief of the Royal Bank of Canada, as their new CFO. [6]

Celsius’ current solvency woes stem partially from the loss of hundreds of millions of dollars worth of customer funds since the beginning of 2021. It is reasonably well established that Celsius lost access to more than 38,000 staked ETH in early 2021 when Fireblocks, a crypto custodian, lost the keys that control them [7]. Celsius lost another 896 bitcoin in a December 2021 hack of BadgerDAO [8]. Celsius was nimbler in May 2022, pulling around half a billion dollars worth of customer funds out of Anchor Protocol unscathed before it collapsed [9].

An additional stress on Celsius is asset-liability duration mismatches of their own creation.
One of Celsius’ strategies was depositing large amounts of ETH into Lido’s liquid staking product and then borrowing stablecoins against the value of the receipt token, stETH. They currently have at least 409,000 stETH pledged as collateral in Aave. 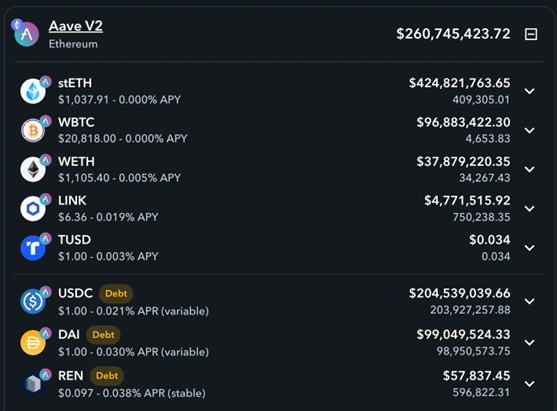 To understand what stETH is, one must know that Ethereum is switching from a Proof of Work (PoW) to a Proof of Stake (PoS) consensus model. Once this transition is complete, ETH holders will be able to earn ETH-denominated yield by staking their ETH to secure the network. In preparation for this transition, there currently exists something called the “beacon chain” to which you can already stake your ETH to begin accruing this yield now. stETH is the token that represents ETH staked using Lido, both the value of the initial deposit and the subsequently accumulated staking rewards.

Common perception is that all stETH will be redeemable for ETH immediately following the transition to PoS, which is expected to happen this year. In reality, stETH redemptions will only be possible after a hard fork that occurs after this transition. The fork is not yet scheduled and will likely be up to a year after the transition. Even once redemptions become possible, the rate at which withdrawals are processed will be throttled over time. For these reasons, one can think of stETH as deferred coupon ETH bond with an unknown duration. The unknown duration of the stETH bond makes it essentially impossible to value against ETH with confidence and yet several billions of dollars in leveraged strategies and products were built on the premise that a roughly 1:1 stETH-ETH price peg will be maintained indefinitely.

So, when clients recently wanted to withdraw their assets en masse during market turmoil, Celsius was quickly unable to honor requests due to the above and paused all withdrawals on June 13th. The clients in the worst shape are those with open borrow positions on the platform that are approaching their liquidation price as the market sells off. Why deposit more collateral to save a position when it is unlikely that you will be able to withdraw any of your money in the end? As of the time of this publication, withdrawals are still paused and Celsius says they are engaging with lawyers about a restructuring of the company. [10]

The rapid fall of leading crypto market maker and prop fund, Three Arrows Capital (3AC), likely also contributed to Celsius’ recent problems. 3AC is generally thought to have lost hundreds of millions of dollars by investing in locked LUNA tokens and holding UST. Details are still very murky but it seems that 3AC has defaulted on loan obligations to many of its counterparties, even the exchange they own and are most associated with. 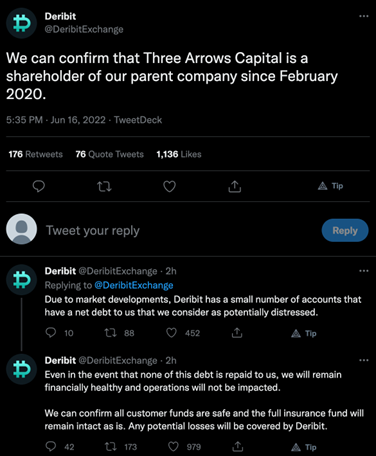 3AC is also selling large amounts of stETH for stablecoins, driving the exchange rate to ETH even further down and threatening Celsius’ leveraged stETH position.

Even before the extent of 3AC’s problems is fully known, those with funds remaining are nervously sizing each other up and trying to guess what the next domino to fall will be so that they can steer clear of it. Currently, the likeliest candidates look like:

Not everything is grim. Opportunity is born of every crisis. If you believe that the transition of Ethereum to PoS will happen, purchasing stETH at steep discounts from forced sellers is a very attractive proposition. [11] DeFi’s core infrastructure has also proven itself robust in the turbulence so far. Maker, Aave, Compound, and the like have processed billions of dollars in liquidations without major incident. Whatever and whoever remains after this wash out will come back many times stronger. Until then, we do what we must to survive.